Some people have said that they want to attempt Whole30 with me for the month of August.  Makes me feel a little better to know I will have some support.  And while Bradley will not be participating in Whole30 (shocking!!) he has expressed that he is proud of me for taking control of my health.  One of my residents, who also has an interest in practicing a cleaner diet, has said that she will check on me from time to time to see how I am doing with it.  I’m hoping the more I talk about it, the more likely I am to stick with it.

My goal last week was to have Whole30 meals for 13 out of 18 meals (Mon – Sat).  I accomplished that!  All of my breakfasts were Whole30 and only one lunch was not.  Monday’s leftovers were technically not Whole30 because the chicken had been marinaded in a sauce that had added sugar.  One of our dinners was at a brewery from a food truck so…it most certainly was not Whole30.  Our dinner on Saturday was so close to being Whole30 but the steak seasoning that we used had added sugar (that stuff is everywhere!).  I also had some cookies and ice cream at work.  (I can already tell that workplace temptations will be difficult.  Although most of the nurses in the clinic have been very supportive and I imagine they will help me stay on track!) Otherwise, all of my meals were Whole30 and delicious.  I’ve kept the cooking fairly simply since that pleases me.  I have to wake up a little earlier to accommodate cooking for breakfast, but I go to bed earlier so it balances itself out.  Overall, this week didn’t feel like much of a chore – that may be because I knew I had the freedom to cheat.  I might feel differently come August 1.

Some things I have started to notice.  No way to tell if these things are hard and true facts.  They are just observations.

Lessons from the book:

So, I’ve been plugging away at “It Starts with Food.”  It is pretty easy to read, but I’m taking most things with a grain of salt.  Not that I think they are wrong or misleading – how can eating natural foods be that bad for you??? – but they are making money off of this so it stands to reason that their literature will reflect an image that supports their business.  That being said, it was interesting to learn more about how foods that are highly processed and full of sugar trick the body into doing all kinds of things that it doesn’t naturally want to do.  And those tricks have a way of putting our bodies on a cycle that further promotes the bad habits.  By eliminating the “tricky” foods (see what I did there?) we give ourselves a chance to reset our bodies and develop habits that are more centered on natural foods and products.  It makes sense, but I wonder how long the effects can last.  As a social worker, I understand that our physical actions are promoted by our mental health.   While it is great to tackle the physical cravings, I have to dig deep and understand the emotional reasoning if I’m hoping to make long-term changes.  I have a sneaking suspicion that homesickness may be the culprit but I’m leaving it open for other causes.

Goals for next week:

None.  Keep up what I did last week but don’t beat myself up when I indulge in alcohol and tasty foods at our house party this weekend.  I decided not to start Whole30 formally until August 1 and there is a reason for that.  I’ll postpone any guilt until then.  And I am beyond excited to have some of my favorite people all in one place at the same time!  I can’t wait for some backyard shenanigans with the people I love most. 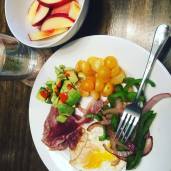 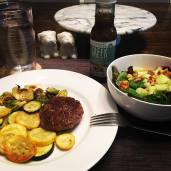 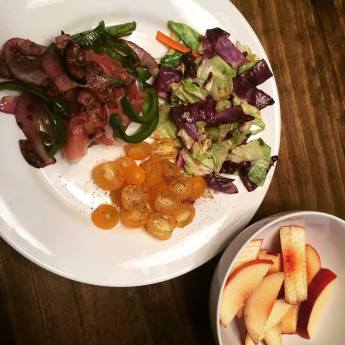 Okay, okay, okay.  So the beer isn’t Whole30.  But the rest was!  Keeping it colorful seems to be working for me so far!

If you think others may enjoy this, feel free to share!

We explored Main Street after our dinner date. The weather was perfect and our moods were matching. We oinked at the pig statues and tried to smell roses while dodging thorns. His skin was warm when I finally scooped him up to go home…and that warmth felt so healing…as if it could touch the colder parts of me.
These two ♥️
“Hi dog!” We hear it at least 20 times a day. They are never far away, especially during snack time. I’ll be the first one to joke that we are over committed in the animal department. But maybe he’ll never know loneliness…at least not at home…and surely that’s reason enough for this small furry circus.
@sharonhundley asked me a few questions about my future…and I saw hope in my answers. Hope that I will restore parts of my creativity in new and old ways. Hope that my family will grow. Hope…that I will feel different than I do today. Not necessarily “better”. Maybe a little stronger…more accepting…more patient…and more ready to expose myself to the possibility of hurt for a chance at joy.
The way he feels about this popsicle is exactly how I feel about this stage of my life: uncertain, worried it will be uncomfortable, a tad bothered at how messy it is…but still intrigued enough to keep going.
Mornings on the river are a new favorite.